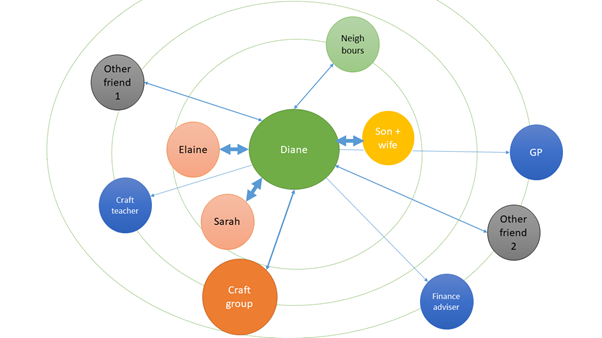 As part of the STRETCH project (referred to as Circles of Support by Age UK Exeter), we have been drawing people’s social networks and social identity maps (example illustrated below), as a way of getting people to think more about who they are connected to, who they give or receive support from and what identities are important to them. A study by Jetten, Haslam, Iyer, and Haslam (2010) asked participants to visually represent a map of their group memberships before and after a significant life change, finding that people who said they had important group memberships before the change showed better wellbeing outcomes after life changes. Additionally, the “self-aspects” pie chart we adapted from research on mapping social identities (Haslam, Cruwys, Haslam, Dingle, & Chang, 2016) illustrates a way for people to think about what interests, groups, and people are meaningful to them and how they can engage in meaningful activities to support these identities.

We have mapped the circles and self-aspect charts of around 17 older people, living in a variety of situations and with various chronic health conditions.  We use these maps to have discussions about resilience as well – thinking about where gaps lie and how to plan ahead.

Most people think of resilience as an individual, personal capacity. ‘Resilient’ people are adaptable to change and can keep their head afloat in difficult times. But resilience can also refer to communities and groups. For example in UK policy, community resilience refers to local community’s ability to recover from natural disasters (Cabinet Office., 2011). Reliance on personal resilience when trying to understand recovery from disasters and negative life events can miss out on seeing how communities and groups of people develop a ‘collective consciousness’ in which they support each other, build solidarity, and are able to coordinate their activities (Ntontis, Drury, Amlôt, Rubin, & Williams, in press). Groups give people the opportunity to experience belonging, and the opportunity to give support to others (not just receive support) (Steffens, Jetten, Haslam, Cruwys, & Haslam, 2016). Moreover, having multiple group memberships gives more opportunities to experience these positive effects and be less negatively impacted by the loss of one group membership (Jetten et al., 2015; Jetten et al., 2010; Steffens et al., 2016).

Therefore in this project we adopted this concept of collective psychosocial resilience (Drury et al., 2019; Ntontis, Drury, Amlôt, Rubin, & Williams, 2018) in the context of older people’s healthy ageing. We set about mapping people’s communities, social networks, and group memberships, looking at the reciprocal relations between them, and using them to help people think about how to adapt to change when and if it occurs – i.e. as a building resilience tool.

Example (not their real names):
We started working with Diane from September 2018. Diane lives on her own in a small village. She has a few minor but discomforting health conditions and has been diagnosed with depression.

Diane has quite a few friends and some family. Of her friends, she has a mix that she sees in person and those who she only speaks to on the phone. She describes her son and his wife, and her friend Sarah as her closest supporters. Also her weekly visits from her gardener and friend Elaine are vital for her.

Self-aspects chart: Diane allotted the largest section of her identities to “nature/gardening/birds” (associated with her friend Elaine), and then “intellect”, “entertaining-including baking”, and “arts + crafts” (she is learning crafts from a teacher). She feels a gap in her ability to express her entertaining interests – for this she would like more face to face contact.

Over the months of visiting Diane, she added some more people to her circles – friends who live in another part of the country, and some new neighbours who are very friendly. In February, 2019, Diane had a period of flu and this made her mood worse, but she has several ideas for activities and events she could involve herself in. Diane’s main concern is increasing isolation and lack of structure if her health deteriorates, such as when she can no longer drive. We also spoke to Elaine, who does the gardening, they have known each other for many years. Despite the potential blurred boundaries between paid employment and friendship, they describe their relationship as close. Elaine thought Diane is well supported, except during the evenings, when she gets lonely.

Using these diagrams we have been able to have conservations with Diane about planning ahead so that she has social contact and meaningful activities to keep giving her a sense of purpose.